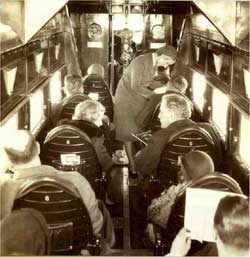 A couple of weeks ago I flew to a speaking engagement in Northern Ontario. Times in the airline industry being what they are, long gone are the big jets to get me to little places. Instead, it was a small plane that was my flying chariot. You know the kind…the kind that, even when departing from a big international airport like Toronto Pearson, passengers are still required to slip into a time warp (as though in the 1960’s) and trundle across the open tarmac, in all kinds of weather, climb up a narrow flight of portable metal stairs to embark a rather fragile looking aircraft. I mentioned the plane was small but I neglected to mention just how small. “How small was it?”, you may ask. Well, it was so small that only a single line of seats bordered each side of the cabin and, in total, I’d say there was room for about 12, tops.

Getting settled in was tricky and fidgety enough. I’d firmly decided that once I’d fastened my seatbelt that would be that for me..,no visiting the facilities enroute no matter how desperate! And, boy, the width of each chair sure was scant, too. Still, obviously the plane was airworthy and sponsored by a major airline so I had total trust that all was well…until…after many minutes of unexplained delay, the flight attendant sheepishly announced that we were experiencing a weight and balance problem and that the flight could not successfully lift off the ground with passengers situated as they currently were. Great. Did I want to get off this plane now? You bet!

Here was the requested solution, “We need all the women to kindly redistribute themselves to the back of the plane while all the men move forward…that’ll do it and we can be on our way.” What to do? Move. It sure was comical watching how we managed to shimmy by one another along that skinny little single-wide isle, all the while fake-laughing and pretending we weren’t at all concerned about our fate. Quite frankly, in all the time I’ve ever flown to speaking engagements (with the exception of getting caught in the early part of Hurricane Alex flying to Miami from an engagement in Nassau…now that’s another story), I’ve never been so nervous about a takeoff. But up, up, up we went and, despite a thunderstorm and lightening display along the way (with lots of turbulence, to boot) we made it to terra firma at the other end safe and sound. Some flights are just like that.

And what did I learn from this lofty experience…yet another example and tale to tell about the value of “shifting perspectives” (a topic about which I devote a whole chapter/12 pages in my book, Getting Passion Out of Your Profession: How to keep loving your living, come what may). Sometimes things seem quite off kilter at work (or elsewhere); if we would only surrender to, or accept, a quality control expert’s wise observations and willingly respond accordingly, we could be well on our way with great success, no matter what. So, a question to ask yourself: Where in your work life, or elsewhere, are you a little out of balance? Where in your workday experience would just a little attitudinal shift forward or back do the trick and make everything better? Hmmm. Something to think about, eh?