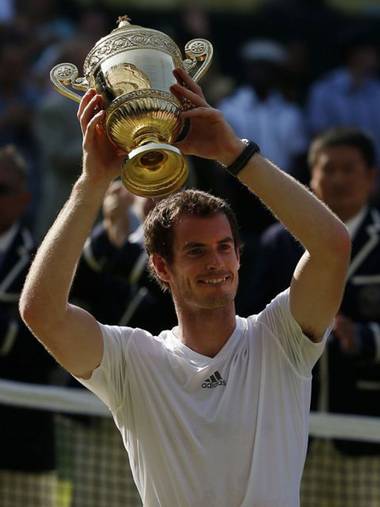 “If at first you don’t succeed, try, try again.”

What a difference a year makes! UK’s Andy Murray never gave up, indeed. After losing Wimbledon to Roger Federer in July 2012, Murray went on to capture Olympic gold, the US Open and finally, yesterday, the sweetness of a hard-fought and long awaited Wimbledon win. Murray is the first British winner of the men’s coveted Wimbledon title in 77 years, and all this accomplished on none other than 7/7. To top off the marvel of “lucky seven”, it took less than an hour for fans and patriots to post 77,000 favourites and retweets of his celebration message after his Centre Court victory. As much as I cheered Federer to win against Murray on July 8, 2012, I confess, last year’s match made me a fan of Murray’s too. And now this.

In my July 2012 Working Wisdom article, A Deuce Delight: Serving Excellence, Serving History, I offered lessons learned for work and life from that Federer/Murray match up. Those messages still stand up today and in some ways have turned out to be prophetic in terms of my reflections on Murray’s influence and tennis destiny. Twelve months ago, at the moment of post-game court-side interview, Murray said, “I’m getting closer”. His positive affirmation was one to hang on to and recall as an inner chant through adversity or when one loses temporarily. Such a perspective declares, “I still believe”. Murray added to those reflections yesterday with, “The story of my career is that I had a lot of tough losses, but the one thing I would say is that every year I always improved a little bit. They weren’t major improvements, massive changes, but every year my ranking was going in the right direction.” Wise words for all.

Summertime marks “half-way-through-the-year” time. Such lazy days (at least a few for you I hope???) offer a terrific opportunity to reflect on the direction in which YOUR career and work/life experience is going. I offer you now the Encore Edition of July 2012’s: A Deuce Delight: Serving Excellence, Serving History, updating the title for 2013 with the, “Times Two/Deux” reference, for it’s NOW “times two” that Murray has given the world of (Wimbledon) tennis enthusiasts a rush for the ages.

I hope you garner good value from this Working Wisdom reread (or first time review) and apply the nuggets that inspire to your own goals, visions and dreams for your workplace team, organization and/or your family/personal life, for the balance of 2013 and beyond: 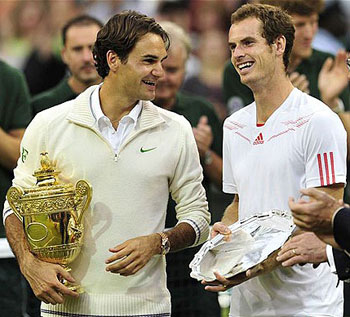 Tennis great Roger Federer challenged up-and-coming threat Andy Murray this past July 8th to win the pièce de résistance of any professional tennis season–Wimbledon. But this win wasn’t just any Wimbledon win and this pitting of pros at tennis’ most prestigious showcase wasn’t just any match up. For enthusiasts, and even fair-weather and Johnny-come-lately fans, this year’s final was something extra special to anticipate and behold. Both players had everything on the line and no matter who won, viewers were destined to have fabulous, dramatic tennis to cheer and milestone history to witness.

On one hand, Federer was billed as an “old man” of 30 trying to regain his glory days (having not won a Gland Slam title in almost 24 months), and was also shooting to equal Pete Sampras’ record of seven Wimbledon title wins. On the other hand, Murray’s admission to this Wimbledon final represented the UK’s first chance at a countrymen’s name on their beloved host-country golden cup since Fed Perry in 1936. So, alongside tennis balls, Federer and Murray were serving excellence and serving history. You could call it a “Deuce Delight!” (“deuce” being the tennis scoring term used to identify a tie at 40 – 40/two the same/two players equal at the scoring point which is two points prior to a game win). From this vantage point (no pun intended!), purely from an entertainment perspective, spectators couldn’t miss! Fans were going to see some special piece of glory that day, no matter what.

Just as with the occasional inspiring movie, e.g. like The King’s Speech, a great book or other prestigious sporting or well-publicized, test-of-mettle type event, Federer and Murray served up terrific lessons to learn (or to be remembered) applicable to work and private life.

Consider these insights and thoughts on both contenders, and how they might pertain to your own workplace (or other place) circumstances when times are tough or challenging:

So, transferring this event and these reflections to your own challenges, workplace or otherwise, ask yourself these questions:

In a nutshell, no matter what the odds, if you believe in your goal and in yourself, be willing to:

And one last question, to tie-in to the title of this Working Wisdom’s theme:

9. How can I create my own professional “Deuce Delight”? When I serve excellence (through my mindset, demonstrations and results), how do I also end up serving history…both my own personal and professional history, and that of my organization, too?

Our greatest glory is not in never failing, but in rising up every time we fail.
— Ralph Waldo Emerson

The harder you fall, the higher you bounce.
— Doug Horton

Stand up to your obstacles and do something about them.
You will find that they haven’t half the strength you think they have.
— Norman Vincent Peale

Some people try to turn back their odometers. Not me, I want people to know “why” I look this
way. I’ve traveled a long way and some of the roads weren’t paved.
— Will Rogers

When it rains, most birds head for shelter; the Eagle is the only bird that,
in order to avoid the rain, starts flying above the cloud.
— Unknown

Success is not just the crowning moment, the spiking of the ball in the end zone or the raising of
the flag on the summit. It is the whole process of reaching for a goal and, sometimes,
it begins with failure.
— Erik Weihenmayer

You may encounter many defeats, but you must not be defeated. In fact, it may be necessary to
encounter the defeats, so you can know who you are, what you can rise from,
how you can still come out of it.
— Maya Angelou

It is by going down into the abyss that we recover the treasures of life.

Where you stumble, there lies your treasure.
— Joseph Campbell

Doubt yourself and you doubt everything you see. Judge yourself and you see judges everywhere.
But if you listen to the sound of your own voice, you can rise above doubt and judgment.
And you can see forever.
— Nancy Lopez

It has been my philosophy of life that difficulties vanish when faced boldly.
— Isaac Asimov

Success in the affairs of life often serves to hide one’s abilities,

whereas adversity frequently gives one an opportunity to discover them.
— Horace

Look not mournfully into the past, it comes not back again. Wisely improve the present, it is thine.
Go forth to meet the shadowy future without fear and with a manly heart.
— Henry Wadsworth Longfellow

The gem cannot be polished without friction, nor the individual be perfected without trials.
— Danish Proverb

What is defeat? Nothing but education; nothing but the first steps to something better.
— Proverb

It is the surmounting of difficulties that make heroes.
— Louis Kossuth