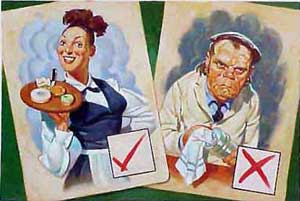 There’s richness in private life from which to draw business wisdom. When it comes to customer service, it’s easy for me to recollect a classic scenario my daughter and I experienced when visiting our English family for the first time, in 1998. They hosted a “brilliantly smashing” visit; we crammed a phenomenal amount into everyday. One day, after visiting Oxford, Bourton-on the-Water, Shakespeare’s birthplace and Anne Hathaway’s cottage, in Stratford-Upon-Avon (don’t you just love the names of places in England that are by the water), we were hungrrrry. Too hungry to travel three more hours without dinner. We stopped at a quaint 500 year old roadside inn in the hamlet of Drayton. Gleaning business wisdom from my holiday was the last thing on my mind.

We walked in and immediately felt our “visitors” status, compared to all the “regulars”. Since no one showed us to a table, we found our own, and then waited several minutes for menus. Mike, the owner, appeared saying (in a tone that almost dared us to wait), “We’re terribly busy and the kitchen is behind; expect a 45 minutes if you want food.”

We waited–45 minutes sped along. Then one hour came and went…then one hour and 15 minutes! At this point, if I was in my own country, I would’ve asked, “Where’s the beef?”, but I was a visitor, with family I was just coming to know, so I held my tongue. At one hour and 15 minutes a couple arrived and was promptly greeted and seated. By our 90 minute mark they had their dinners, while we had yet to see our appetizers! I pointed this out to my family (we all saw it pretty much simultaneously), but it was difficult getting Mike’s attention. Maybe I was paranoid, but I swear he was avoiding us! Minutes later, Mike finally materialized (for the first time in an hour). As he breezed past our table, we all boisterously piped up with, “We’ve been waiting an hour and a half for food which we thought would show up at least 30 minutes ago, while those people who’ve just arrived have their dinners already!”. As whiney as we may have sounded, in the moment, we felt quite justified. 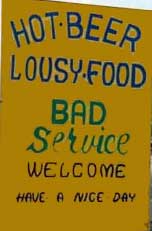 Mike didn’t apologize. He became verbally defensive and reiterated, with strained mock patience, “We’re terribly busy in the kitchen, and I told you this from the start and…blah blah blah blah blah”. We were so disgusted we asked for our money back and were prepared to leave hungry (at 10 pm with miles to go before we slept!). He wouldn’t give us our money back! You see, you pay in advance for “bar” food in an English Pub. We raised quite a ruckus. If I hadn’t been so emotionally involved in the moment I’m sure I’d have been embarrassed by our behaviour. Other patrons were definitely disturbed by our outburst, but Mike found it more important to “be right, than happy” and continued to argue his position. In the middle of this, the food arrived! We’d worked ourselves up, demanded our money back, was told “no” by the owner of the establishment and now…now we were suppose to stay and eat? Well there it was and there we were…and it was 10:30 pm. by this point. So we stayed and ate, grumbling and rehashing the entire episode, still at a volume which disturbed the ambiance of this little country inn on an mid-summer’s Saturday night (it was more like a mid-summer’s nightmare than a dream). I don’t think Mike had ever thought of the words or concept of “damage control”.

To the bitter end this man could have fixed things with us…offered a 50 percent discount, free desserts, the whole thing complimentary, whatever. But to the bitter end Mike preferred to dig in, calling his customers wrong and himself right. Mike may have owned a restaurant but he didn’t know how to run one.

What could Mike have done differently, to save the reputation of his inn, in our eyes (and to cause me not to have “ammo” for writing this article)? What can we do differently in our own businesses, to secure and/or save our own organization’s good name (and perhaps our own, along the way), in the eyes of our customers–even when the customer is wrong and we’re right?

The bottom line is this: if you don’t have customers, you don’t have a reason to professionally exist in the line of work you’re performing. Customers are king and queen…and organizations that sincerely “get” that, have head and shoulders advantage over their competitors. Unless, of course, you prefer to think of yourself as Basil Fawlty, of the British Sitcom, Fawlty Towers (hysterically well played by John Cleese). Basil is a seaside hotel owner who treats all his guests as major pains, inconveniences, idiots and imbeciles. So what’s it going to be, “Mikey”? This question is posed to that bit of “Mike” which, at least from time-to-time, resides in us all. Yes, indeed, it is amazing what business wisdom can be gleaned from vacation; why bother learning from customer service case studies when you can get so much more from actual life?

P. S. To this day, if you ask my daughter to share her most vivid memory of her first trip to England, she will recount in great detail the pub fiasco of that mid-summer’s nightmare in the English hamlet of Drayton. Keep that in mind the next time you are faced with a disgruntled customer. How do you want your organization to be remembered in such an instant? You’d better care, because customers have long memories and their loyalty (or lack of it) is directly related to how they are treated by you/your organization, in both the good days and the bad.