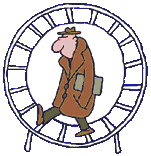 “One-third of employees loathe their jobs”, reads the headline of a concerning article in the January 28th, 2003, edition of Canada’s national newspaper, The Globe and Mail (Report on Business Section), reporting on a new Towers Perrin study of 1,100 employees, polled across Canada and the United States. Employees cited “boredom, overwork, concern about their future, and a lack of support and recognition from their bosses as key reasons for their unhappiness.” And, to many employees, Monday mornings are the worst part of that treadmill of an unhappy week.

How you feel about your work has much to do with how you feel about the rhythm of your week. For too many people, Monday is Doomsday! Does your 6 o’clock alarm hit you like a bolt of lightening? Or does the whole of Monday morning pass you by in a vague and nauseating blur? Take a survey–what percentage of people do you suspect would say that Monday is their least favourite day of the week? How many upbeat, inspirational songs are written about Mondays? Are there any restaurants named “Mondays”? Of course not–no one would go there!

One gray Friday morning in the winter of 1969 (when I was in grade six) my beloved teacher, Miss Lakatos, playfully chalked “T.G.I.F.!!!” in the upper right hand corner of the blackboard. She then asked us to guess what this acronym stood for. We couldn’t guess, so she told us (need I say–Thank goodness it’s Friday!!!). Miss Lakatos taught us, all those years ago, to celebrate Fridays–and it was fun! But find joy in Mondays? Wash your mouth with soap!

The majority of heart attacks occur between 8 and 9 a.m. on Monday morning, (the beginning of the work week), reported Max Wyman, of the Vancouver Sun, on March 16, 1998. He should know–he was one of them! I had often heard this statistic but had never conducted any research of my own. At times, I was sure it was an urban myth, concocted by some fellow professional speaker to help illustrate a platform point about reducing stress. So before repeating this data, yet again, I enquired with the Heart and Stroke Foundation of Ontario–sure enough, a member of their External Relations Branch confirmed it’s true! These findings are supported by multiple medical studies, one of the most respected of which is the ALLHAT study (an international, multicenter study funded by the American National Heart, Lung and Blood Institute, in cooperation with the U.S. Department of Veterans Affairs Cooperative Studies Program, with multiple teams across Canada and the U.S.A).

Why Monday? Think about your own weekend–if you’re single, maybe you “pardy hardy”! If you’re “married with children”, you probably blend in a frenetic agenda of mundane chores and tasks with “quality family time activities”, which may very well include driving the kids here, there, and everywhere! You may get up just as early (or earlier) but you go to bed later. Be honest, haven’t there been some Monday mornings where you’ve flopped into your chair, exhaled (for the first time in two days) and said, “I had to come back to work today to get a rest!”

Playing around with your Circadian rhythms, is a major factor in egging on Monday morning heart attacks. Circadian rhythms refers to daily cyclical variation or patterns of behaviour or physiological functions in all living beings–even those of the singled cell variety. These are the patterns of activity that occur on a 24–hour cycle, and are important biological regulators in virtually every living creature. In mammals, the internal circadian clock resides in the brain, and sunlight is the cue that rewinds this clock. Daily circadian rhythms and your “biological clock” go hand-in-hand-it’s not just a term referring to women of a certain anxious age! Psychiatric and medical studies have shown that circadian rhythm is involved in some forms of depression, “jet lag”, drug tolerance and efficacy, memory and insomnia. This “body clock” manages daily functions such as your core body temperature, hormonal release, cognitive ability/comprehension, as well as your wakefulness and sleepiness. When these natural rhythms are disrupted (as they usually are on weekends), resulting symptoms may include sleep disorders, severe fatigue, major digestive problems and the inability to react or concentrate. Is all this enough to scare a person into working seven days a week? I certainly hope not! It may give you cause, however, to pause and examine how shaking up your weekend rhythms, coupled with a sinking dread of the impending Monday morning, may be bad for your health!

What can you do to help make a more peaceful emotional and biological/physiological transition from Sunday night to Monday morning? The impact of Monday morning blues can be devastating enough at the best of times; now fold in those potential February “blahs”! Fight for your Monday morning heart-break with these suggestions: 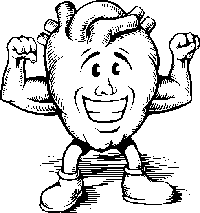 These suggestions may liberate you to re-connect with your original passion for your work–well, at least with your enthusiasm for showing up on Monday mornings! The Towers Perrin Study (reported in the Globe and Mail) states that, “employers have a lot to gain by harnessing employee passion in their current work forces–gaining this discretionary effort from employees may be the last remaining source of increased productivity, now that so many companies have already captured the efficiencies of technology and streamlined work processes”. Getting back to your passion for your profession can start by getting the Monday Morning mumbles out of your system! There’s definitely “something in it” for the employee; there’s something in it for the employer, too!

Give yourself a heart–break on Monday mornings–your physical heart as well as your emotional one; fight for your scheduled Monday morning heart-breaks, so that you won’t have an unscheduled heartbreak!