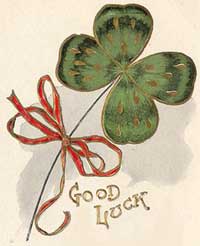 “Some guys have all the luck… some guys have all the pain,” so says Rod Stewart in his song entitled the same. Why is it that some people seem luckier than others? Why is it that some of those “nice guys” really do seem to finish last? Karma? Destiny? Luck? Believe it or not, feeling and thinking yourself “lucky” at work or elsewhere–feeling blessed with good fortune–is a predictor of your level of success and joy in life.

In the 1990’s Professor Richard Wiseman of University of Hertfordshire, England, was so intrigued about this subject that he set out on a “lucky” expedition of his own. Dr. Wiseman placed advertisements in newspapers asking for people who felt consistently lucky or unlucky to contact him. Hundreds of extraordinary men and women volunteered for his research and, over the years, he interviewed them, monitored their lives and had them take part in experiments.

Dr. Wiseman’s results reveal that although these people have almost no insight into the causes of their luck, their thoughts and behaviour are responsible for much of their good and bad fortune. It’s the ‘ole self-fulfilling prophecy all over again!

When it comes to, for example, the case of seemingly chance opportunities, Dr. Wiseman determined that lucky people consistently encounter such opportunities, whereas unlucky people do not. Are these opportunities available to all people? Is it merely a matter of honing one’s ability to observe and act on opportunities, or is there really some “magical” aura around some and not others?

To examine these questions further Dr. Wiseman gave both lucky and unlucky people a newspaper, and asked them to look through it and report how many photographs were inside. He secretly placed a large message halfway through the newspaper saying “Tell the experimenter you have seen this and win $250.” This message took up half of the page and was written in type that was more than two inches high. Another large message also appeared in the newspaper, revealing the exact number of photographs. You guessed it… the people who missed the first message also missed the second! 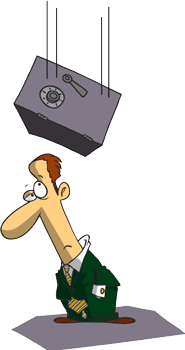 Although these large print messages stared all participants in the face, those who confessed they felt unlucky to begin with tended to miss the messages, while those who declared themselves lucky tended to spot them. Dr. Wiseman reported that unlucky people are generally more tense than lucky people; this anxiety disrupts their ability to notice the unexpected. Are you lucky at work? In private life? What is your current day-in and day-out anxiety level? Could you, by chance (no pun intended) be undermining your own good fortune with career opportunities, projects, business and personal relationships simply because of pent up anxiety? And, perhaps, a better question still… what can you do to reduce your workplace anxiety or stress, and get luckier?

These same unlucky people, who missed the experimenter’s big give away, are the same people who miss opportunities because they are too focused on looking for something else. Has that ever happened to you? As Dr. Wiseman suggests, “They go to parties intent on finding their perfect partner and so miss opportunities to make good friends. They look through newspapers determined to find certain types of job advertisements and miss other types of jobs.” How many times have you come across colleagues (or maybe even yourself?) who bellyache about their current positions–seeing all that is wrong–to the point where they miss the opportunity to appreciate the valuable work experience and professional lessons they are gaining right then and there?

“Self-fulfilling prophecy” suggests that what you think about comes about. A Zen-like way of saying this is, “What you think about expands,” or, to put it yet another way, “Be careful what you wish for, because you just might get it!” Dr. Wiseman’s research illustrated that lucky people are more relaxed and open, and therefore see what is actually there–in their reality… in front of their faces–rather than just what they are looking, imagining or hoping for.

According to Dr. Wiseman, lucky people generate good fortune via four principles. “They are skilled at creating and noticing chance opportunities, make lucky decisions by listening to their intuition, create self-fulfilling prophecies via positive expectations, and adopt a resilient attitude that transforms bad luck into good.”

Some criticize Professor Wiseman’s research by saying that he confuses luck and success, suggesting that if something causes “good luck” then, by definition, it is not luck. They argued that luck is a chance happening, where the outcome is governed purely by outside, uncontrollable factors; so rolling a double seven is lucky, paying attention while reading a newspaper is not. Others challenge that there is no such thing as “luck”–only “chance.” It is the outcome of chance occurrences that people will then attribute the judgments “lucky” or “unlucky'”–and this is very much reflected by their personality or state of mind. “Luck,” they may say, is not a universal law or property. People who regard themselves as “lucky'” reveal more about their attitude towards life than to any inherent “luck.”

American Business Coach Linda Brockbank states, “Lucky people expect success,” and, “Fortune often emerges from the ashes of a problem.” Ain’t it the truth? Think of a time where you experienced a devastating or sad set back (at work or in private life), but from which you later recovered (either physically, mentally and/or emotionally), and then proceeded to see the hidden benefits of that “horrible event,” e.g.,, someone loses their job; at first it’s awful–perhaps even depressive–but, a year later, you see them on the street and, more times than not, they will say… “It was the best thing that could have happened to me!” There it is… the fortune out of the ashes! While accepting his first of thirteen Grammy awards, Duke Ellington said, “I merely took the energy it takes to pout, and wrote some blues.” Out of some misery came sweet music and a fabulous and much lauded career.

Lucky people have automatic psychological techniques to cope and thrive in unfavorable situations; the good news is… even if you are not born with such a mind set, you can train your brain to “think positive… think lucky”!

Make this your month to start getting luckier! How about embracing or borrowing the “Luck of the Irish” on March 17th–St. Patrick’s Day–and making this date the day you start a plan–a new way of thinking–for loosening up a bit more and taking your own professional and personal luck to new heights. Go on… you’ve got everything to gain!

Those who have succeeded at anything and don’t mention luck are kidding themselves.
Larry King, American Talk Show HostLuck is believing you’re lucky.
Tennessee Williams, American PlaywrightI am a great believer in luck, and I find the harder I work, the more I have of it.”
Stephen Leacock, Canadian Humorist

“People who want milk should not seat themselves in the middle of a field in hope that a cow will back up to them.”
Elbert Hubbard

“Miracles are great but they are so unpredictable.”
Peter Drucker, American Organizational Development Guru

“I skate to where the puck is going to be, not to where it has been.”
Wayne Gretzky, Canadian Hockey Superstar

“Chance is always powerful. Let your hook be always cast; in the pool where you least expect it, there will be a fish.”
Ovid, Ancient Latin Philosopher

And, Lastly… Nina’s Slightly Modified Irish Blessing for You:

May the road rise to meet you.
May the wind be always at your back.
May the sunshine warm upon your face;
the rains fall soft upon your fields and,
until we meet again, (with my next “Working Wisdom),
may God hold you in the palm of His hand.