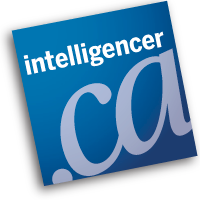 While the room was full of remarkable women, Tracy Wright was the one named Quinte’s Remarkable Business Woman of the Year.

She was announced this year’s award winner during a special event at Occasions on the Bay on Friday.

The award — known as Remarkable Woman in previous years — is given out annually by The Intelligencer and co-sponsored by Shopper’s Drug Mart Quinte Mall and Belleville Toyota.

The award recognizes women who have shown creativity, dedication and passion in their workplaces.

Wright was nominated for the award by Kelly McCaw, a local realtor and councillor for the city of Belleville who wrote of Wright’s journey from being a single mother of three barely getting by, to running and owning a successful business focused on the caring of others.

“I first met Tracy approximately five years ago through real estate business dealings with her and I had no idea how fortunate I was to have met this kind, wonderful and generous person that today I call a trusted friend,” wrote McCaw in her nomination letter.

An emotional Wright took the stage to thunderous standing ovation from her peers.

“I really don’t like the spotlight, I work behind the scenes,” she said quietly, adding how appreciative she was everyone there.

Raising three young boys on her own and living pay cheque to pay cheque, Wright took a chance to improve her family’s situation by enrolling herself into a health care program at Loyalist College. Over the next several years she juggled attending classes and working as a waitress, all while raising her family.

After successfully graduating from the program, she worked her way up one job at a time, one step at a time.

Today she runs a successful business employing several companion care professionals specializing in care for seniors and others of varying needs in the community.

“Her generosity and passion for helping others has propelled her into becoming one of the most genuine, loving and strongest business women I have ever known,” wrote McCaw

Attendees at the event were treated to some inspiring words by guest speaker Nina Spencer, bestselling author of ‘Getting Passion Out of Your Profession.’

“Make your choice, adventurous stranger, strike the bell and bide the danger, or wonder, till it drives you mad, what would have followed if you had,” said Spencer, quoting C.S. Lewis from The Chronicles of Narnia, adding it’s a quote that’s always inspired her.

Throughout her presentation Spencer discussed using positive instead of negative language, acknowledging your individual value, keeping your balance through challenging and changing times, practicing shifting perspective as well as nurturing your professional relationships and inspiring others to do the same.

Spencer was profiled by the National Post as “One of Canada’s leading motivational speakers,” and was an occasional expert advisor on workplace issues to The Globe and Mail, “Communications Guru” for Biz TV and recurring radio personality on Bell Media’s CKOC in 2014 and 2015.

“We had an outstanding group of nominees this year,” he said. “Every one of them should be proud of their accomplishments.”

A special section with details on nominees and highlights from the events will be published this Thursday, Nov. 3 in the Trentonian, Community Press and County Weekly News newspapers.