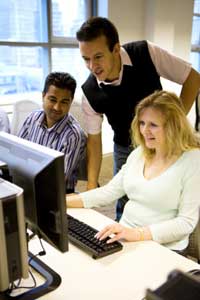 It doesn’t matter what you know, unless you know what really matters.
— Dr. Tim Elmore

My 23 year old niece, Elizabeth, has now logged a blissful 6 months in her first real, fulltime, post-university position and has worked hard at doing all she could to accelerate her comfort with her new colleagues, and win their approval and acceptance as one of the team. With a desire to demonstrate enthusiasm and loyalty, she made a conscious decision to eagerly attend every staff function from last autumn to present. Additionally, she earnestly shows up for work 45 minutes early every day (beating even the biggest bosses to the door), usually skips her breaks, lunches at her desk (or takes abbreviated midday breaks, at best) and stays a good 45 to 60 minutes after “quitting time”, every night. Why? Not to show her employer what a dedicated employee she is, but rather, because she L-O-V-E-S her job. She’s still amazed that she found a position that so well suits her budding professional skills and talents, and applies wisdom gleaned from her degree. A dream come true, these days, for a B.A. graduate.

Well, after graduation, finding a good job…what comes next? “I want to move out. I want to start my full-fledged adult life. I want to get a place of my own.” Her parents understood and accepted. With an impressive nest egg saved, Elizabeth now spends much of her free time on-line cruising for condos. One day this past week, she actually took her 15 minute morning break to, what else?…surf for condos. Like many, once she has a bee in her bonnet, Elizabeth is keen to carry her vision from conception to manifestation. The one time she’s on the web “inappropriately”, her manager happens by and comments, “Don’t you have enough to do? If you’re so idle you can spare time on-line on private matters, I can find work for you…there’s always plenty that needs to be done!”

Did this manager know what really mattered in this situation? This manager may know plenty about her organization, but one has to wonder–noting this sarcastic comment to a fine, diligent young worker–how much she really knows about sustaining staff motivation and inspiring employee productivity and loyalty. With one careless, off-the-cuff comment (where, obviously her brain was not functioning three seconds faster than her mouth), this manager spewed words and a sentiment that Elizabeth experienced as hurtful and disrespectful. She immediately felt underappreciated for all she does on a daily basis, and that her manager had sorely missed the mark on understanding her daily above-and-beyond output.

A 23 year old, typically, does not yet know what, for example, a 33, 43, 53 or 63 year old knows…that there’s a time and place to professionally assert and speak up for yourself, especially to the person to whom you report. And so Elizabeth said nothing, but seethed the rest of the day, and confessed she felt like crying. Thanks to my work, my niece knows that tears on-the-job, in most cases, are a manifestation of anger, not grief. She knew, then, that she was angry and she knew her anger got in the way of her balance-of-day productivity. She knew it, but her manager did not. What’s the definition of a lose-lose situation? This. Who “won” that afternoon? No one. Not Elizabeth; not her manager; not the clients whom their organization were supposed to serve that afternoon.

The following morning my sister told me she noticed Elizabeth was still home long passed her usually departure time. When asked why, Elizabeth replied (with a little attitude, not directed at her mum), “I know. I’ll still technically be on time, but I just don’t feel like being there early today.” They both knew why.

People aren’t loyal to organizations; they are loyal to individuals.
— Marcus Buckingham

When it came to this employee/manager confrontation, in my estimation, here’s what Elizabeth did right:

In my estimation, here’s what Elizabeth’s manager did right:

Well, if I tried hard to say something positive, I would concede that the manager saw something she didn’t think was quite right about an employee’s on-the-job behaviour and addressed it. It’s just that she addressed her observation in a spontaneous, completely unenlightened leadership manner, which damaged–even if only temporarily–the employee/leader relationship and her employee’s productivity.

As a frontline employee, what could Elizabeth have done better?

As a Manager, what could Elizabeth’s boss have done better?

People sometimes resign over seemingly “little” things like this/little misunderstandings and miscommunications, especially if such a confrontation is the straw breaking the camel’s back. The bottom line is this: the more “engaged” frontline (and all staff) are at work, the lower the turnover, the higher the productivity, the progressively greater the employee’s positional expertise, the higher the client satisfaction and, in the for-profit sector, the higher the profitability. As unemployment rates are currently relatively low, compared to days of old, engaging and satisfying frontline staff should matter a great deal to managers, for if frontline staff feel too underappreciated and under-acknowledged these good workers may simply jump ship. And loosing trained staff, even at the frontline, is very costly. Repeated studies show employees resign, more than any other reason, because of bad relations with the manager to whom they directly report. It’s the manager, therefore, more than any other in the organization, that can inspire a satisfactory employee workplace experience and greater degrees of employee retention. It’s amazing how a few enlightened, sincerely delivered comments of managerial support, praise and positivity, every now and then–extending benefit of doubt to these employees once in awhile, too–can make all the difference.

So once again, whether you relate more to Elizabeth or her manager, it all comes down to this…

It doesn’t matter what you know, unless you know what really matters.
— Dr. Tim Elmore

And what really matters, as one of my fine colleagues reminds is…

Across the continent and around much of the world, this week is acknowledged as Administrative (as well as Frontline and Support Staff) Professionals’ Week…an especially good time to appreciate, applaud and admire these hard working, often-unsung contributors within our companies and organizations. If you are in a position of leadership or individual contribution in the workplace/if you are an employee who consumes the services of administrative professionals, take the time to express your appreciation. If you are a member of the support staff ranks, yourself, take the time to:

P. S. If this edition of Working Wisdom inspires you to rethink your own perspective on day-in and day-out relations between admin staff and management, you may also wish to (re)view April, 2009’s Working Wisdom, entitled: What’s in a name? That which we call a rose by any other name would smell as sweet (as I’ve received multiple requests for permission to reprint this WW offering for many April, 2010 trade journals and company/organizations’ in-house staff newsletters and publications).