Jack was lost. But now he’s found. My grandmother would have wept.

My grandmother was the youngest of 13 children (raised in England). Her biggest brother was also her favourite, and the eldest—John, a.k.a. Jack. Throughout my growing up years she recounted the heroic stories of “my big brother Jack”—each time, in the end, choking back tears. Which made me cry too, because who wants to see their grandmother cry? I didn’t understand why her fun stories about Jack always ended in grief. And she never explained. When I was older, I finally mustered the nerve to ask. My grandmother explained that my Great Uncle Jack was killed in Flanders Fields in WWl. But that was all she knew. That was all any of us knew who were still alive to protect and cherish Jack’s memory and ultimate sacrifice.

My grandmother has long since passed. Although I never knew Jack’s figurative or literal “rank and serial number” details, at least I was clever enough, back in the day, to interview my grandmother for a rudimentary understanding of the Rogers wing of my family history—which included asking the given names of my great grandparents. That information, as destiny would have it, would turn out to be a lucky question. Every year, from the time of my own Brownie and Girl Guides days, through my days as a Girl Guide leader, and right up to the present, when attending Remembrance Day Services I always said a special prayer for my Great Uncle Jack—for his sake, and then later for my grandmother’s. That was all I could do. That was all I knew. Then, one day in November 2014, everything changed.

I happened to hear a CBC radio interview with RH Thomson, who was championing his poignant website: theworldremembers.ca. The literal minute the radio interview was complete, I visited theworldremembers.ca, full of anticipation that this was the portal through which I’d discover more about my Uncle Jack! The anticipation was palpable. I swear I had a premonition that I was going to find him that day. I felt momentarily disillusioned, and plain sad too, to see that so many soldiers named “John Rogers” died during WWl, each listed by year; 47 pages of them. But, I soldiered on (forgive the pun), going in and out of the details of each fallen man who shared the same name as my great uncle, pausing long enough to remember and consider that each of those Johns were somebody’s special, dear lost loved one, even if not mine. Nothing in the 1914 list fit. On to 1915. In and out of several names I went on that page too without any luck, and THEN… THERE IT WAS! OMG!!! There was my uncle’s name and all his details (thanks to knowing my great grandparents’ given names and thanks to this wonderful website!!): John Cresswell Rogers, a private with the Norfolk Regiment, died of his wounds in Flanders Fields, Belgium, Dec. 19, 1915. My dear great uncle. Found.

I discovered that Jack’s regiment was one that was present at the well-told Christmas Eve Truce of 1914, and the subsequent soccer game on Christmas Day that is oftentimes recounted. Had my uncle had actually played? This I’ll never know. But this amazing website did help me find the name of the Belgium town where Jack was laid to rest, the name of the cemetery and even his plot number. I was home alone when all this came to me, but I gasped and gulped, and cried out loud anyway, “Oh my Goodness! Oh my Goodness ! I’ve found you Uncle Jack!!! I’ve found you!!!” All the while crying with the glee of a person who had just won the lottery! I kind of had. Jack had been missing from our family for 100 years.

Now I knew, now we knew—thanks to this website, modern technology, and the focus on the 100th anniversary observance of WWl—where Jack was. He was 33 years old when he was killed. He never married; never had children to love and raise (beyond the surrogate of my grandmother); and now 99 years had passed. Who knows him now? Only four people (me, my sister and two cousins) know the stories of our Jack Rogers. Only four people know his name; that he “lived, felt dawn, saw sunset glow” (as John McCrea captured in his most famous Remembrance Day poem, In Flanders Fields). No one in our family knew where he rested until my chance listening to CBC radio program that late-autumn 2014 morning. I felt a profuse gratitude to www.theworldremembers.ca and to RH Thomson for honouring and remembering each of the “them” that are also referenced in the lines from the Ode of Remembrance (a passage embedded in Laurence Binyon poem, For the Fallen): They shall grow not old, as we that are left grow old; Age shall not weary them, nor the years condemn. At the going down of the sun and in the morning. We will remember them. We will remember them.

The serendipitous alignment of these events brought my Uncle Jack “home” to his remaining family, a century later. He lives, in our hearts, all the more now because of these new details. When this pandemic is finally over, and we are free to travel again, a man who never got the chance to create a family legacy of his own will have flowers placed on his grave by loving family members; blood-of-his-blood, a century later. Not flowers placed on the grave of some unknown soldier, in memory of Jack, but on his actual grave: Plot IV, Row G, Grave 42. That’s poetic and beautiful. And as it should be. 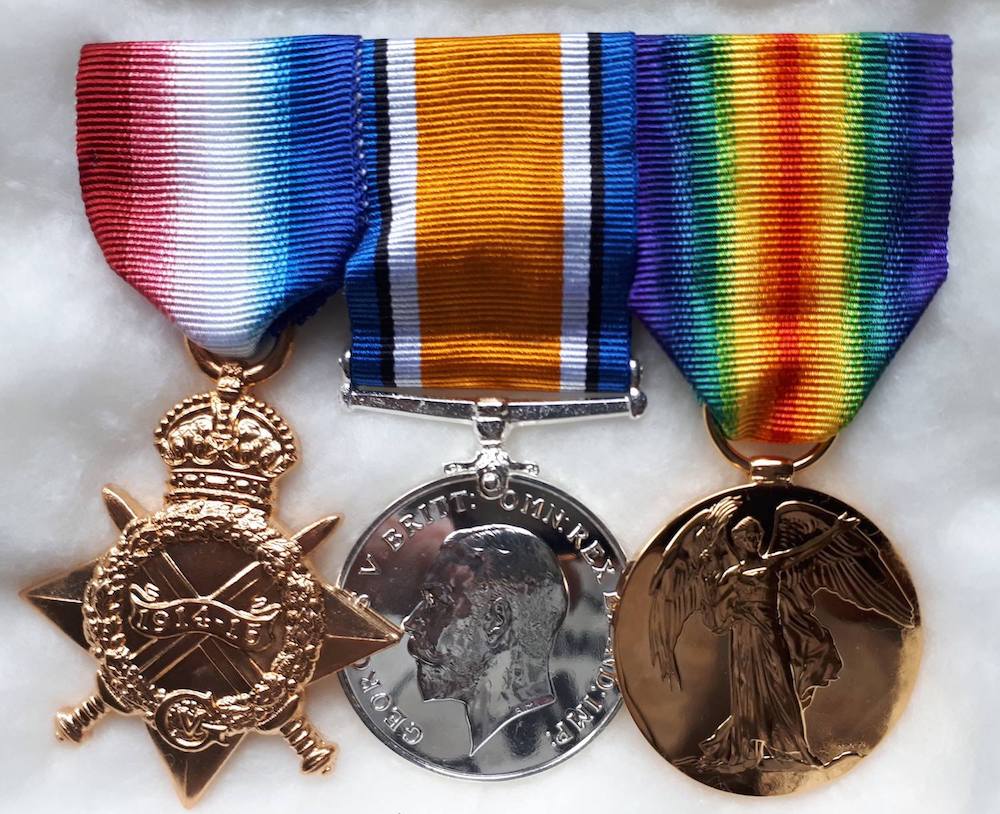 Meantime, knowing how I valued the heritage stories of my Great Uncle Jack, unbeknownst to me, my husband was inspired by my discovery and delved deeper. He reached out to the UK Archives and after much patience, tenacity and sleuthing was able to retrieve Jack’s entire war record—all the battles in which he fought, including the one in which he was killed due to a shrapnel explosion. Furthermore, he contacted the Queen’s appointed company in November of 2018 and had my uncle’s medals re-commissioned/reissued (pictured here—The Bronze Star of 1914-1915, the Great War Medal and the British Victory Medal). My husband’s intent was to give Jack’s reissued medals to me as my early-December 2018 birthday present. Regretfully for my husband, they did not arrive on time. He was beyond disappointed, while still maintaining the secret of the gift. I thought he would burst. Every day for the next two weeks he’d anxiously awaited the mail. But nothing came. Then, on the very anniversary (Dec. 19th) of John C. Rogers’ death, the medals arrived. Just imagine my surprise! Just imagine the gobsmacking jolt I got when I realized the significance of the date on which they arrived—that this gift was “late” turned out to be what we at our house call a “bad news/good news, who can tell?” story. It was as though the spirit of my great uncle manipulated my birthday present’s delivery date so that it would amp up the poignant meaning and joy by coinciding with the date of his passing. It was all the more meaningful to receive this cherished gift those two weeks later. Poetic and perfect. If that moment was a movie it couldn’t have been any better. My grandmother would have cried. So did I. But in a good way.

This (pandemic) year, Remembrance Day, like every other special date we’ve observed or celebrated so far, is oddly different and often challenging. But we can still wear our poppies, commit to pausing for two minutes of silence at 11 o’clock (and encourage others to do the same), donate to the Royal Canadian Legion Poppy Fund (even if it’s just the price of a few poppies that you would have otherwise purchased from a store) 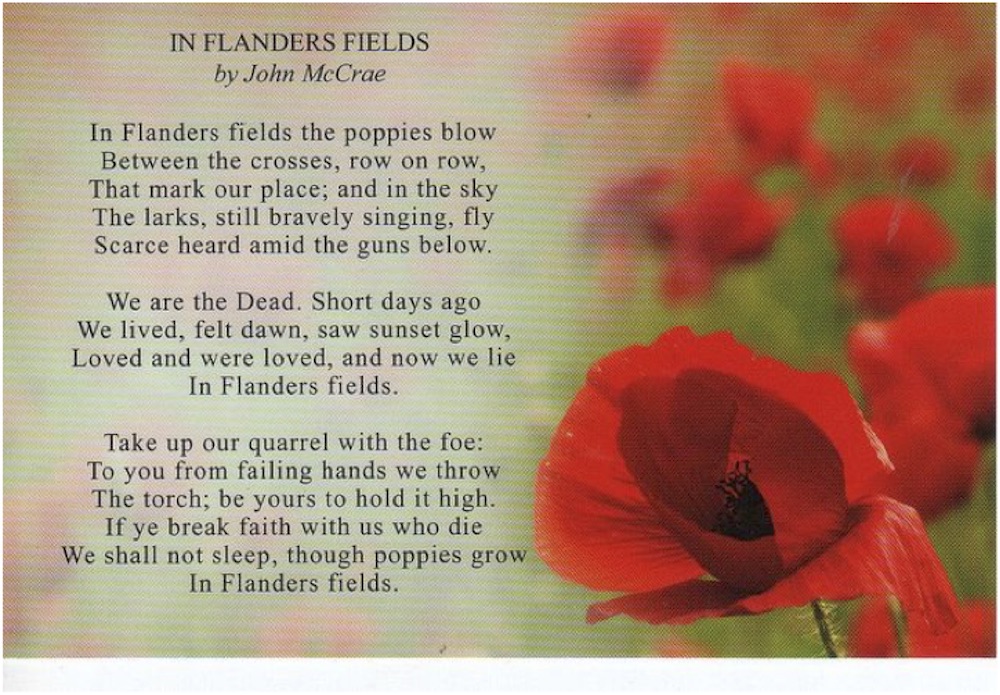