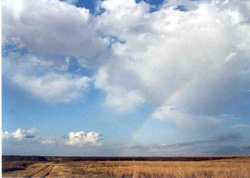 I found myself dawdling about starting, perhaps because it’s such a broad topic or perhaps, because I was waiting for a real life story to kick me off! Disappointingly,nothing particularly poignant happened around this theme this month and then … one Sunday afternoon, I was digging around in my closet, looking for an old “zippered” binder that I had promised my daughter.

I unzipped that binder and found a time capsule of papers, clippings, and “stuff”, from 1995! Am I the only one like this? It was kind of fun remembering where I was “at” professionally, back in 1995, when I was using an 81/2″ by 11″ planner format! And finding little things that I had long since given up looking for! As I ferreted around the pockets and slots, Eureka! I found it!! The serendipitous inspiration to kick off this month’s “Leadership” article!

A tiny strip of paper, folded like a fortune from a fortune cookie! As I unfolded it, I decided I’d play a game with myself! I decided that there was a mysterious destiny about finding this paper, and that it would lead me to somewhere I needed to “go”! Can you imagine how much twilight zone music I heard when I read, “Leadership: The art of getting someone else to do something that you want done because he wants to do it!” (Dwight D. Eisenhower). Pretty succinctly put, eh?

Why are we putting so much focus on Leadership again? There was lots of research done on leadership in the sixties and then the focus shifted to teams, organizational values, goals, vision and mission statements, etc. in the 80’s and 90’s. Now Leadership again! We never really stopped stressing its importance in the success of a prosperous and productive organization, but it did start to take a back seat as a corporate theme of utmost importance.

Why “Leadership” again? Well from my research, I recall that after WW II, business was booming, the phenomenon of leaving the farm for the urban landscape was “on” and we needed lots of new managers for these new and growing businesses. Back then, and even now, there were people who thought that you couldn’t make a silk purse from a sow’s ear, and you couldn’t make a leader out of a “follower”! This became such a challenging debate, as the need to fill leadership positions pressed on, that a massive amount of research was poured into studying leadership! General conclusions: there is no one best leadership style, some people may be “born leaders”, but a lot of what makes a “good” leader can be learned!

Some of the most cutting edge and enlightened of organizations have paid careful attention to the professional development and demonstration of their leaders. These leaders have demonstrated behaviours and attitudes that have been consciously mentored and groomed by clear thinking senior management, who knew that they had to help their leaders “learn” leadership.

In many other organizations, however, people in the official leadership positions have achieved this status by being promoted from within, by being proficient at the position they left behind. In other words, they were good technicians at their first job so they were promoted! This may have worked, after a fashion but, by a long shot, didn’t guarantee that they understood how to lead others. They may have been good technicians but , even to this day, take a survey and you’ll find scads of people who’ll anonymously tell you that they still work “for” “leaders” who have next to zero “people” skills! This is one of the main reasons why I believe there’s a push to taking the theme and demonstration of leadership, amongst those charged with delivering it, to new heights!

Senior management knows that they’ve historically appointed all kinds of people to “leadership” positions, perhaps even including themselves, without a proper “education” of the Personal and Professional Mastery it takes to “get someone else to do something the leader wants done because that someone else WANTS to do it!”. Especially when the times are tough!

Until this decade, leaders could get by on Fair Weather Leadership practices but then the storms of restructuring, downsizing and asking people to learn to do “more with less” came along. I’ve heard the cry of many a middle management leader, in many of my workshops, over this past decade, say, “No one ever said we’d have to be “counsellors” for our employees. No one ever said we’d have to psychologically guide the way through these murky waters of all this change. All I wanted to do was be a manager, not an organizational psychologist!” No one ever said? Too bad… time to learn. It’s the biggest and most important part of your job! As Tom Peter’s has said, “Lead, Follow or Get Out of the Way!”.

As Edgar Schein, from MIT’s Sloan School of Management has said, “If the world is to learn to manage itself better, many more people in organizations will have to be leaders and the leadership functions will have to be more widely shared.” So, whether we have the titled leadership position or whether it’s a matter of demonstrating our personal leadership, on a team or in an organization (or anywhere else, for that matter!), this much is certainly true… a more powerful, influential, persuasive and effective leadership comes from those who have mastered leading through inspiration rather than fear.

We’ve all worked “for” leaders, at some point in our careers, who had the title and authority, so we did what we were suppose to do, but we weren’t inspired, nor did we care, to go the extra mile “for the gipper”! What kind of leaders inspire us to have the passion and enthusiasm for going the extra mile? What kind of leaders amazingly draw out our talents, creativity, commitment to quality and professional growth? Leaders who know they must draw on their own personal leadershipâ€”not just their titles! And who really gives a leader “personal power” anyway? Many people think that if you believe you have personal power, then you do but, in reality, a leader only has personal power if the followers bestow it on them. In the end the followers “get to say”.

The question becomes, “So how do I develop my personal leadership power with the people with whom I work?”. One answer is to know what it takes to become empowereredâ€”right thinking, right actions. But, knowing HOW to demonstrate our leadership only takes us so far in our empowerment. What really influences others to “follow the leader” … is the leader’s personal understanding of WHY they want to demonstrate their leadership in the first place. So ask yourself, “Why should I, do I, want to demonstrate my personal leadership, at work or elsewhere?”. Come up with a thoughtful, credible answer and then ask yourself, “And WHY is THAT important to me/others/the organization?”. When you’ve answered THAT “why”, ask it again! Do this “Five WHYS” exercise, as the name suggests, five times. THEN you’ll start to really get at some good, down and dirty reasons why all this leadership “stuff” is important for you, professionally and personally, and your organization, in the 21st century workplace.

Wow! All this from a little slip of paper! I think for next month, I’ll try cleaning out my briefcase! Who knows … there may be inspiration for three more articles in it!