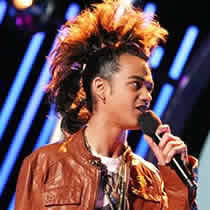 Well here’s one of my dirty-little secrets…I watch American Idol. Yup–Religiously. It started off as something that my daughter and I could sit down together and watch and have a laugh and be entertained, chat, etc. And then she got bored and abandoned ship (weeks and weeks ago). What became of me? I’m hooked–even try to schedule my evening social life around it. Pathetic, eh? A couple of weeks ago I spoke in three time zones in four days and had to laugh at myself as I mildly fretted that I’d miss Idol because I’d be in the air getting to my next destination, only to realize in each case, when I hit my hotel room, that I was “saved” by the magic of flying westbound into earlier time zones and was therefore still on time for Idol — Brother! I need to get a life, but don’t tell anyone, OK? I figure once spring is really here–here in Toronto we’re starting to wonder if it will ever arrive–I’ll be just fine). But I digress…back to Sanjaya.

Just in case you’re not remotely an American Idol fan (and perhaps if you don’t read any newspapers, either)…you may have totally missed knowing about the controversy buzzing around 17 year old Sanjaya Malakar–a contestant who is, comparatively speaking, weak on vocals but surprisingly strong on making visual impressions each week with his constantly changing hair dos and don’ts (from tresses and locks to maligned faux hawks…like the rhyme? I threw it in as a bonus!).

The Sanjaya phenomenon has been covered in print, radio talk shows and, no doubt, around the office water cooler, too. There’s something about Sanjaya. He’s a mediocre singer–even by his own admission–but he’s made top seven and will go, perhaps, even further. Why? Because talent is important, true. But it’s not enough. It’s not everything. Perhaps you’re thinking, “What’s this got to do with me…my work, my professional competencies and abilities?” Well, in an ideal world the technically most qualified, most educated, most skilled, most “on-paper-suited-for-the-job” person would get the job, or the promotion, win the competition or whatever, right? In the real world, however, this is not always the case. Ask yourself, “What is my likeability factor? How would I measure up if it came down to a contest of genuine charm and grace versus refined talent and skill?” In the real world, being the “right” person for the job will only take you so far–the rest of the successful journey is carried by likeability, charisma, personal magnetism, etc. Call it what you will, but the last mile–and perhaps the most important one–is carried and often won by something other than talent.

Sometimes it’s a real head-scratcher trying to figure out why that person–that “less technically worthy” person–got the brass ring instead of another. For example, while surfacing the channels last evening I momentarily came across CMT/Country Music Station, while they were laughing and making grand fun of the look of shock and unmasked disbelief that melodramatically flashed across Faith Hill’s face when Carrie Underwood’s name was announced as Female Vocalist of the Year at the CMAs annual awards, instead of hers. It appears Ms. Hill fully expected to win and even went so far as to throw her arms up victoriously a split second before Carrie’s name was spoken (you can see it for yourself on YouTube). Now I’m not suggesting that Faith Hill lacks talent or charisma–hardly–but this example still nicely illustrates how a multitude of factors can be at play when it comes to “winning” at work and that it’s not always the most obvious frontrunner who will rise above.

So go ahead, of course, make sure you’ve fortified yourself with professional talent, skill and core competencies required to perform your work–they’re essential components for getting the job done–AND ALSO, as singer Bonnie Raitt sings, “…give ’em something to talk about.”