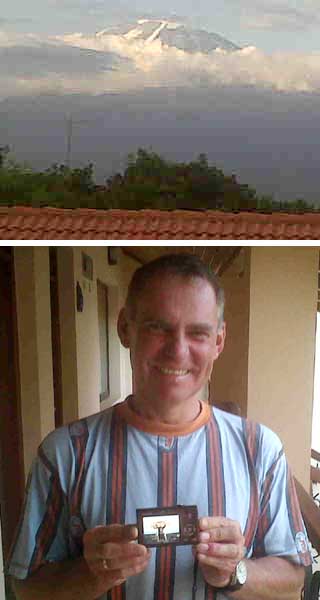 Seven hour bus ride today from Nairobi, Kenya to Moshi, Tanzania, crossing rural Africa in a way classic to what you might see on a travel or history tv channel or read in a magazine, e.g National Geographic. We experienced moments of adventure and uncertainty at the border and that’s all I have to say about that (as Forest Gump would say) for now. All turned out well.

When time for our on-the-bus-bag- lunch our organizer keenly declared she had ordered peanut butter and jelly sandwiches for all–a classic hiking sandwich and we were pleased. When we opened our bags, however, it was “lunch bag let down.”. Why? The cook thought we’d all asked for peanut butter and DELI and therefore, slapped between two slices of toasted white bread was…wait for it: peanut butter and Baloney! Yup, a new sandwich is born (the cook must have thought we Canadians a bit odd!). Still, it was sustenance and we gladly ate it, as we jostled and bounced along with such force, across incredibly rough roads that it is. Amazing we didn’t all “lose” our lunch an hour later! All fodder for the adventure.

About an hour later Kerry was the first to spot Kili in the distance, then another and another and another saw it too. I couldn’t see it and felt so sorry for myself but everyone kept trying to explain to me where to look. Finally I saw it!!! “Oh my God, oh my God is all I could say, in an utterly THRILLED and GIDDY way. Was truly a rush. WE are going to the top of THERE!!! There was so much noise and laughter and excitement on the bus, followed by a quick turn around of quiet. It was sinking in. It’s not talk or fantasy anymore; we’re rely DOING this! I can just imagine some may have felt, “stop the bus, I want to get off”–but we are ready for this and it’s full speed ahead!

Arrived at our hotel in Moshi, Tanzania — the Parkview. The whole mountain top was disappointingly shrouded in cloud. As I went to walk away and try later for a picture, I met Jopsef Seitl from Bavaria/Munich, Germany. A nice man of 52 who just returned from the summit yesterday!!! I have chatted with people who summitted five, three and one year ago, and even another from December, but never someone who just came back YESTERDAY! He was positively glowing and I could not contain my excitement at having the chance to talk with him. This is him with his summit pic on his camera (you’ll just have to trust me). Bed now. Orientation tomorrow at 9 and then I’m just going to lie low before going high. I’m going to organize and pack my ascent duffel bag. I like to be quiet (ha ha ha) the day before any big day, speaking engagement or otherwise. No gallivanting on Moshi for me. Wish me luck, my friends, for it’s now officially “Ascent Eve!”