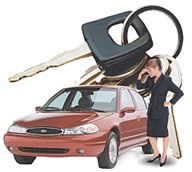 Yesterday at the gas station a woman locked herself out of her car while it was still running (purse and keys inside). A man offered to help her (he, coincidentally was a locksmith and had the means)…for $30.00!!! I commented that it would be nicer if he helped her just to be kind…to be chivalrous??? He said that in this economy he had to make a buck anyway he could and that, “How else am I going to pay for my locksmith’s license?” So what??? He cruises gas stations on Sunday mornings hoping to find people who’ve locked themselves out of their cars??? This is his business strategy for making money/for earning a living???

I suggested to this damsel-in-distress that her $30.00 would be better put to use towards a CAA membership, which she could get on-the-spot and, at the same time, receive her first service. I’ve been a die-hard member since 1975 and have now lost track regarding how many times they’ve helped me out of tight spots over the years, from battery charging, highway flats to, yes, even rescuing my dog from inside the car, in winter, when the new fangled electronic doors spontaneously locked.

When the locksmith heard me suggest CAA as an alternate to his “services” (that would take money out of his pocket and put it elsewhere), he retorted, “Okay, okay. Since you’re in a spot, and it’s an old car, I’ll do it for $20.00!” As if being an older car had anything to do with it. This “business man” was clueless! He certainly didn’t have a proper brain for growing his business (nor, seemingly, a chivalrous bone in his body). He didn’t get the bigger picture…that maybe this stranded-at-the-gas-station woman would have sang his heroic praises for days (and maybe weeks and months) afterwards, to lots of neighbours, friends and colleagues, perhaps even going on to book him to change all her house locks the very next day, thereby, giving him a much bigger pay day, tomorrow, than the $20.00 to $30.00 he was trying to hustle today!

The woman took my advice and called CAA (who, on a sleepy Sunday spring morning, arrived with a smile and that neat door opening tool, in less than 10 minutes!). A bad news story turned into a good news story for this woman; she now has all kinds of 27/7 roadside coverage down the metaphoric and literal road. And as for that locksmith shyster, well, he lost…everything.

Whether it’s helping out a person at a gas station on a Sunday morning, assisting a fellow colleague with their overwhelming workload when you have time to spare or linking up an in-between-jobs friend with others in your networking circle or business community, lend a generous hand, as the old Bronwnie’s motto used encourage…anyway you can. Now, more than ever, is the time for all good people to come to the aid of those in need. It’ll be good for their sprit and for your soul.